Page Summary: A concise refutation of the article titled “Humans are Not Herbivores” authored by the so-called “Vegan Biologist”; debunked, refuted.

An article titled “Humans are not Herbivores” was published in January 2016 by the anonymous and self-declared “vegan biologist”. It has been shared many times on social media by people who seem to think it has scientific merit and that it debunks veganism. However anyone who has read the article can see that it has little, if any, merit.

Firstly, it has numerous errors of basic grammar. Some are listed below so as to highlight the low standard of care shown by the “vegan biologist”. Secondly, their article contains pro-meat nutrition claims yet omits easy-to-find important scientific facts that debunk them. I cover some of these further below.

For what it’s worth the author of this refutation is an actual university graduate of biological sciences. In the following decades I have further studied human nutrition and overall health extensively. I have also been vegan for more than twenty years. I went vegetarian in 1989; was when I quit eating meat. In that context my impression of the website veganbiologist(dot)com is that it appears to be a troll site set up to undermine the vegan movement.

This refutation was composed in December 2017; almost two years after “Humans are not Herbivores” was published. As that article may have been fixed since then, due to rebuttals like this, you can see the late-2017 version here on the internet archive.

1. A list of some basic grammatical mistakes in “Humans are not Herbivores”.

The purpose of this section is to quickly highlight the low intellectual standard displayed by the “vegan biologist” (VB). Someone who truly cares about the related issues would not publish these numerous glaring mistakes let alone leave them online for years. The quotes are from the late-2017 article. My comments follow.

VB article: “So let’s go down the table and just stop and thing at every row.”
Comment: It ought to state “think” instead of “thing”.

VB article: “… carnivorous polar bears, It might be …”
Comment: There is a comma where there should be a period (a full stop).

VB article: “Some foods needs to be chewed more to swallow.”
Comment: That is a terrible sentence for several reasons. One issue is that it ought to state either “food needs” or “foods need”.

VB article: “This species didn’t look neither like A nor B.”
Comment: That is a terrible sentence; too many negatives.

VB article: “No are created to be food.”
Comment: That sentence makes no sense.

VB article: “A carnivore is an organism that feed exclusively …”
Comment: It ought to state “feeds”.

VB article: “humans has not evolved longer than chimpanzees”
Comment: That ought to state “have not evolved for longer …”

VB article: “The ancestors of Homo sapiens cooked their food, cooking has been around for approximately a million year …”
Comment: The sentence requires the word “years”. The comma ought be a period or semi-colon.

VB article: “An image that constantly circulates in various places is this: …”
Comment: “Constantly”? That means always, all the time. If the image in question isn’t being circulated all the time then that assertion is incorrect; as is so much in the VB’s article.

VB article: “I think that trying to claim that humans are something else than omnivores are just counter productive”
Comment: The phrase “are just” ought be “is just”.

VB article: “and no planning ahead what so ever.”
Comment: It ought to be one word, as “whatsoever”.

VB article: “And hey! This is the longest ever debunking of a meme I ever done, and probably will do. Memes are stupid”
Comment: Firstly they have not placed a period (a full stop) after the word “stupid”. And does the VB author think the phrase “I ever done” doesn’t sound stupid?

The author writes in the style of a teenager who hasn’t passed basic English in high school; let alone attended university; let alone graduated and earned the right to proclaim themselves as the “vegan biologist”.

2. In regards to claims about nutrition and omission of important facts by the “vegan biologist”.

For debunks of related myths see this site’s page about Iron.
It contains and links to scores of science news reports that explain:
a) consumption of heme iron (the variety in animals) is associated with higher rates of heart disease, cancers & diabetes;
b) humans can easily obtain sufficient iron from plant food sources;
c) iron-deficiency anemia is rare and occurs in similar rates among people on omnivore or plant-based diets.

If the VB author truly cared for human health and for progressing the vegan cause they would point out those very important and easy-to-find facts about iron. But instead they put forth a statement that promotes the consumption of animals.

Regards Vitamin B12, the so-called “vegan biologist” states: “Humans are not able to synthesize sufficient b12 in the gut, neither can humans acquire b12 from any other source than animal origin or artificially fermented – supplements …”

However there are numerous reports in science journals that state otherwise. They report that bio-available vegan food sources for B12 include purple lavers (a seaweed, often used as nori), chlorella (another algae) along with certain mushrooms such as the shiitake, black trumpet & golden chanterelle varieties. For excerpts and links to numerous of those science reports see this site’s page about Vitamin B12.

If the VB author truly cared for the related issues they would point out those very important and easy-to-find facts about B12. They would also refer to:
+ the Framingham Offspring study that showed around 40% of the sampled general population, being mostly omnivores, were found to be, to use the word of an USDA article, “flirting” with B12 deficiency. In the words of Dr Jennifer Rooke MD: “Most interestingly there was no difference between those who ate meat, poultry, or fish and those who did not eat those foods.”
+ the 2018 report in Nutrients journal that showed the vegan group had the highest average plasma concentrations of B12 at 292.26 pmol/L while the average for meat eaters was below the 258 pmol/L level at which people can “exhibit neurological symptoms at the upper level of the deficiency range” – to quote from the USDA article linked just above.
+ The evidence that most B12-related supplements are administered to farm animals and that it is routinely done to them because they too are deficient. To quote from Dr Rooke’s article again: “In order to maintain meat [as] a source of B12 the meat industry now adds it to animal feed, 90% of B12 supplements produced in the world are fed to livestock.” To quote from the website of DSM, a manufacturer of supplements for farm animals: “B12 is normally added to diets of all swine” and “to diets of all poultry” and that “supplementation of cobalt is the normal means of meeting the vitamin B12 requirement of ruminants”. See this page for lengthier quotes and the links to those source pages.

However, instead of pointing out those facts regards vitamin B12, the “vegan biologist” has chosen to omit them and instead put forth a statement that promotes the consumption of animals.

To quote from their article they are “guilty of cherry picking on several points.”

3. In regards to whether humans are naturally herbivores, frugivores, omnivores, carnivores, starchivores …

A new page is coming to this site that collates articles and clips on the topic.

In the meantime, and most importantly, the fact is humans can be healthy and even healthier through a vegan or vegetarian whole-foods plant-based diet. For excerpts and links to more than a hundred science news reports about the health advantages of healthy vegetarian and vegan diets see this page on our site.

Other pages on this site feature quotes and links to more than two hundred reports on the higher disease and death rates associated with meat consumption and dairy consumption.

The overall grammatical sloppiness of the “vegan biologist” shows that they do not care for details nor for putting forth a good impression of themselves. To borrow their words they come across as “utterly ridiculous”. Their omission of nutritional facts that support veganism suggests that they do not really care for the issues.

The evidence, from the poverty of their article, is highly suggestive that the so-called “vegan biologist” is probably neither. They seem to be a troll who enjoys spreading misinformation. In that regard, their article has been shared multiple times, that I have seen, on social media forums. It has often been posted by pro-meat and pro-hunting advocates.

If the goal of the “vegan biologist” was to undermine veganism, to cause more harm to animals and to accelerate the damage our food habits do to the planet’s biosphere – via the climate crisis, deforestation and biodiversity loss (links to pages on this site) – they have achieved their goal.

They have also caused great distress to many vegetarians and vegans by handing a propaganda weapon, as flawed as it is, to pro-meat advocates who have used it to mock and bully; and as an excuse to refuse to read the pro-vegan scientific information that is featured on the other pages of this site; via the links above and below. 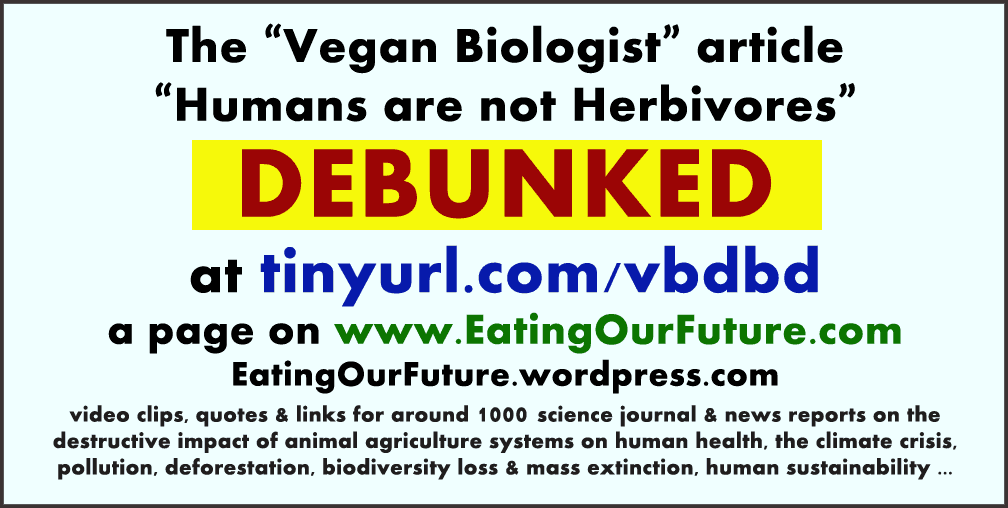 See this site’s Home page for links to pages on many related topics.

For example, this site has pages that feature quotes and links to a large collection of articles that:

To return to this site’s Home Page.